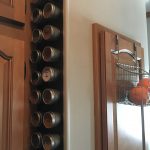 In this article I explain how I made a magnetic wall to hold my spice tins.  To read about other space-saving spice storage ideas, read my article “Spice Storage Ideas to Help Your Organize Your Tiny Kitchen.”

Ever since I first saw the idea on Pinterest, I have been on a quest for the perfect magnetic spice storage system, and finally, after several iterations, I think I have it.

First, let me tell you about some of the versions I’ve tried in the past.

Five years ago was my first attempt.  My roommate and I bought a set of metal party favor tins from Michael’s with the plan to hang them on the wall with adhesive magnetic strips.  Unfortunately, the magnetic strips wouldn’t lay flat and stay stuck to the wall since they had been rolled up, so we ended up using a bunch of finishing nails to nail the strips to the wall.  It worked pretty well, but the black strips weren’t very pretty, and later, when my roommate moved out of that apartment, I had to buy some putty and white paint to help her cover up all our holes.

A few years later, my husband and I bought a house and moved out of that apartment, but my roommate stayed behind, so I let her keep all of the spice tins.  I decided to recreate our spice storage system with a few modifications, and I came up with this:

I purchased stainless steel that would hold a magnet for the backsplash, which I had cut to the right size with holes punched in each corner so it could be screwed to the wall.  I had so many spices that I needed a cheap container, so I used plastic paint containers and glued ceramic magnets to the lids.

I really loved the look of that spice wall, but after three years of living in that house, I discovered some problems with the system.

First, the plastic containers were not made from food-grade plastic, and the oils of some of the spices (like ground cloves and cayenne) started to eat through the plastic and weaken it.  Scary unhealthy, I know.

Second, being right next to the stove meant that my containers were hard to keep clean and would get covered with a thin layer of grease and dust.

Finally, the spices’ colors faded and their flavors became less potent, due either to being exposed to direct sunlight from a south-facing window, or being next to the hot stove, or both.

Armed with these experiences, when my husband and I sold our house and moved into a fifth wheel RV, I set out to create my best spice system yet.

I knew I wanted to splurge and purchase metal tins with clear windows again because I love their uniform look.  As I was contemplating again ordering a piece of stainless steel and wondering whether I could get metal tins to stick to it or if I would have to purchase more expensive magnetic spice tins, a new idea occurred to me.  Instead of stainless steel, I could use adhesive magnetic sheets, like what are used to turn a photograph into a refrigerator magnet.  I ordered a package and tested their strength by holding one against the wall and sticking a tin container to it.  It stuck!  So I went ahead and ordered fifty 2 oz. party favor tins from Paper Mart, which was the cheapest place I could find them online.  (I told you I have a lot of spices!) 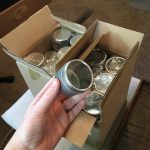 Then I stuck the magnetic adhesive sheets to the wall where I planned to hang my spices. 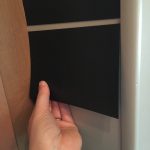 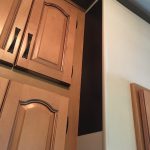 Once I got the magnets up, I filled my spice tins, wrote the names of the spices on the lids with a wet-erase marker, and stuck them to the wall (in alphabetical order, obviously.  There are a LOT of spices with names beginning with “C”). 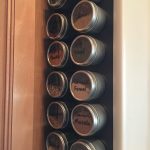 Over the next few days, a few of the magnetic sheets started coming away from the wall.  I just pressed them back down and ignored the problem until a few nights later, my husband and I were sitting in the living room watching TV when all of a sudden–CRASH!  ALL of my spices came tumbling down.  Fortunately all of the lids except one stayed on and kept my spices safe, but several of the jars landed in the cat’s water bowl, which of course instantly erased the words off the front.  After thoroughly cleaning the tins, I had to use my nose to identify the spices whose names had been washed off.  (Could you identify marjoram by smell alone?)

Undaunted, I ordered industrial strength double-sided adhesive and used it to stick the magnets back on the wall.  The adhesion was good, but the tape was a bit thick and kept the magnets from laying completely flat.  The tins wouldn’t stick to the bumpy surface.  I can at least vouch for the fact that this adhesive is very strong, truly easy to remove, and left no trace on my RV walls after I pulled it all back off.  It also makes a very interesting sticky, rubbery ball when wadded up.

Then I did what any sensible person would do when faced by an insurmountable obstacle: I Googled the problem.  Apparently I was not the first person to have idea of using adhesive magnetic sheets.  I ended up finding this website, where I found the advice to do two things which I had not done the first time:

I decided to try one more time.  I ordered a new package of magnets since the glue was no longer as sticky on my old ones, and I ordered this hard rubber roller. 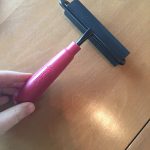 Also, I decided to make some labels for my spice containers so I wouldn’t have to worry about splatters or wet hands smudging the names of the spices.  I kinda wish the letters where white since black is a little bit hard to see, but I decided I could live with black in order to be able to print them at home instead of having to pay (and wait) to have them printed somewhere else.  (If you’d like to print my labels to use yourself, you can find them here.) 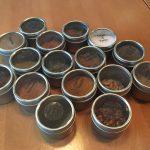 So I stuck my new magnets on the wall, went over them thoroughly with the rubber roller, and waited 24 hours.

Then I put the spices back up on the wall.  (I am a pro at alphabetizing now!) 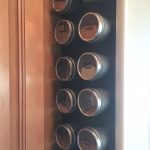 And now, over a week later, they are still sticking just fine! 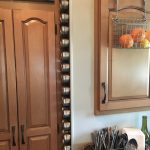 And the magnetic sheets can be easily removed if we ever sell our RV to someone who doesn’t want them.

I’m hoping that light and heat won’t be as much of an issue in this spot since they are facing away from the window and are a good three feet at least from the stove.

A couple things to note, though.

So that’s how I finally made the spice wall of my dreams!  Let me know if you have any questions I didn’t think to answer!  If you would like to see some other great ideas for storing spices, check out my blog post called Space-Saving Spice Storage Ideas.

For more ideas for organizing and storing things in a camper or motorhome, check out my RV organization resource page!