You are here: Home / RV Renovating / DIY: How to Replace Lampshade Hardware Fittings 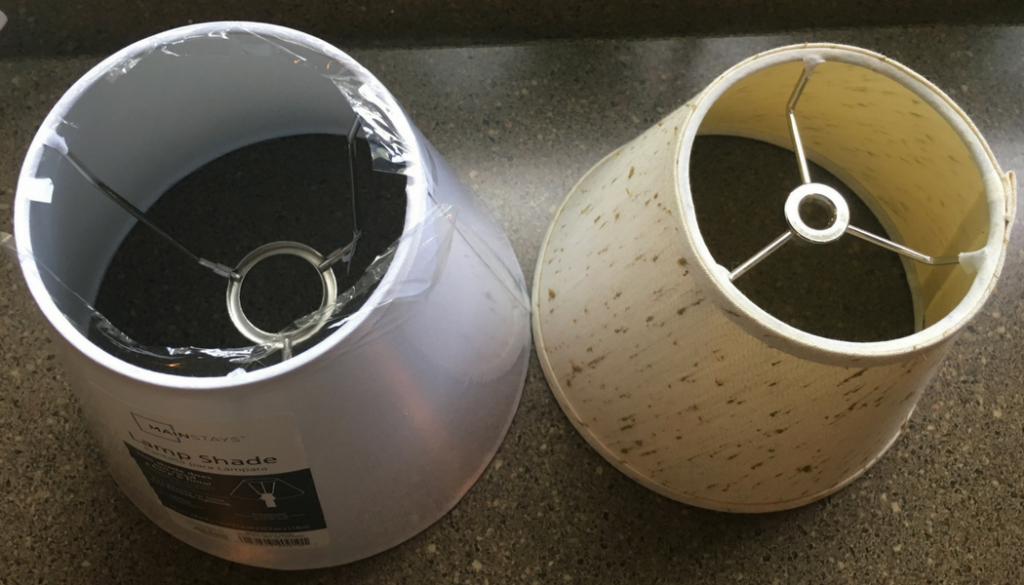 Having trouble finding a lampshade with hardware that fits your lamp or light fixture?  Here is how you can change the fittings on a new lampshade to make it fit.

The backstory:  I wanted to replace the lampshade on this wall sconce.

Unfortunately, I was having a really hard time finding a small, inexpensive lampshade with spider fittings that would work with the wall sconce; most of the decorative lampshades I was finding had an uno or harp style fitting.

Finally, I decided to buy a new lampshade from Walmart and try cutting it to the right size and replacing the hardware on it with the hardware from my old lampshade.  You might not want to attempt this with a super expensive lampshade; since this one only cost me about $10, I figured it wasn't too much to lose if the project ended in failure.

You can see the difference between the fittings in this photo:

Now, you don't actually have to buy a new lampshade to do this project.  You could purchase pressure sensitive styrene, which is a flexible plastic material that you can adhere any fabric to, and then cut out a lampshade shape.  You can see how to make a new lampshade using that process in this Martha Stewart video.

I decided to do it my way for two reasons:

Here were the materials I used for this project:

The first thing I did was start ripping off the trim.

Once I got the trim off, it was pretty easy to pull the bottom ring away from the shade.

I then repeated the process by removing the trim and ring from the top of the shade.

I accidentally tore the shade itself a little bit.  It was okay because I knew I would be covering it up later, but after that I was more careful.

Once I got the hardware off, it was time to cut the shade to the right size.

I started by cutting vertically along the seam.

Step 3: Using the Old Lampshade to Make a Template

Next, I took apart my old lampshade in the same manner (the point of no return!).

I didn't mind cutting up my old lampshade, but if I had wanted to keep the old lampshade, I could have purchased spider lampshade fittings from Etsy and made a template for a new shade by measuring my old lampshade.  (This blog post explains how to make a lamp shade template.)

I laid my old lampshade out flat on top of the new material and taped both of them down so that they wouldn't budge while I was tracing.

Using a pencil, I traced the outline of the old lampshade, lifting and replacing the pieces of tape individually when I got to them.  Then I carefully cut along the pencil lines.

Step 4: Attaching the Old Hardware to the New Lampshade

Time to attach the old hardware.  I started with the top.

I ran about an inch of hot glue along the ring and quickly stuck it to the top of the shade material.

I worked my way around with the hot glue, only gluing a little at a time since the glue dried pretty quickly.

After the top was completely glued, I glued the old ring to the bottom.

After both rings were glued in place, I needed to close the seam.

I decided not to use hot glue for this part because I didn't want any glue seeping out from under the edge and making the lamp look ugly.  Instead I used some Duck brand double-sided tape I had leftover from a window shrink film kit.  I just used it because it was what I had on hand; you could probably use any good brand.

I trimmed off the excess tape before pulling off the backing.

Then I pressed it down flat.  There, isn't it pretty?  🙂  Just kidding.

Next, I hot glued double-fold bias tape over the ugly top and bottom edges.  I used 1/4″ tape because I had some leftover from another project, but you could use a wider width if you prefer.  Bias tape is fairly cheap and comes in many colors, but you can also make your own using any fabric.

On the outside of the lampshade, the bias tape stayed folded.  On the inside, I unfolded it and wrapped it around the metal ring.

Gluing the inside was a bit tricky and involved a few burned fingers.

Here's what it looked like once I finished adding the bias tape to both the top and bottom.

It looked pretty good, so I decided to stop there, partly because I was almost out of bias tape, and partly because, as I mentioned earlier, I was planning to add another cover to the lampshade anyway.

But if I had been intending to use the shade without adding a cover, I would have glued on another layer of folded bias tape as trim to make it look extra neat, like this:

Here are a couple of photos of me holding a second layer of bias tape in place to show what that would look like.

I made removable covers for my new lampshade so I could change the look to decorate for each season!  Click here to read more about this project!

Here is my new lampshade in use!