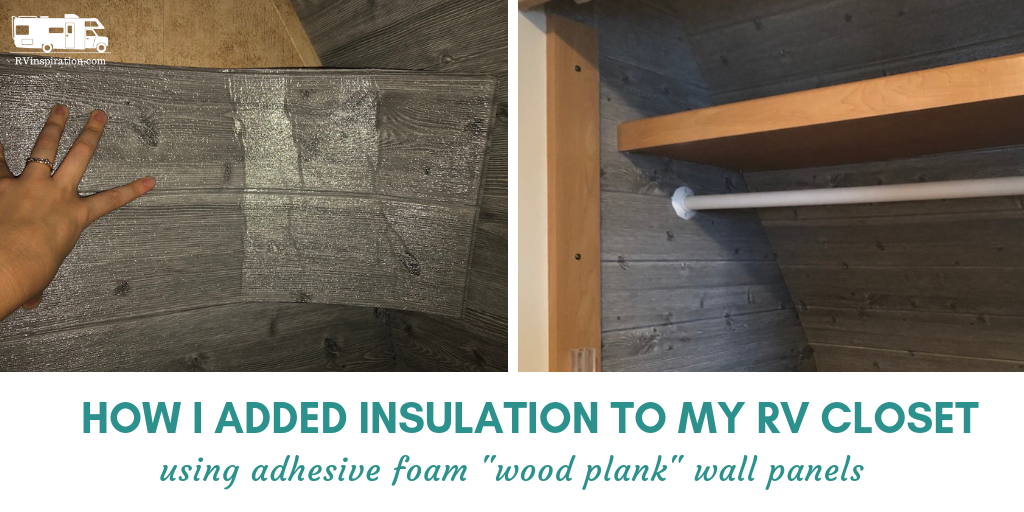 Campers and motorhomes are notorious for having thin walls without much insulation.  This of course makes them lighter weight, but also means it’s hard to keep them warm in cold weather.  Even if you have a four season RV for winter camping or full time living in extreme cold, you may find that some of your walls are better insulated than others, and cold walls can cause condensation to form, which can lead to mold or mildew.

We’ve been fortunate not to have had any serious problems with condensation during the three winters we’ve spent so far in our Keystone Everest fifth wheel, but there is one place that gets colder than the rest of the RV, and that’s our bedroom closet.

Last year I taped some Reflectix to the back wall of the closet to try to help hold in some of the heat, but I’ve since heard people who battle condensation in their RV’s say condensation can become trapped behind the Reflectix, so I decided that wasn’t a method I wanted to recommend.

Then a few months ago, one of my subscribers told me about a way she increased the insulation in her RV closet.  I loved the idea and decided to try it myself, and that’s what I’m sharing in this blog post.

What I Used for Insulating My RV Walls

The key to this project is an adhesive decorative wall covering from a company called Arthome.  In fact, this project has a double bonus: not only can it potentially slow down heat loss through the walls of an RV, but you could use it to give your RV walls a style makeover as well.  As far as I know, this product is only available for purchase online at Amazon.com.

Update 9/23/2019: The brand I originally purchased is no longer available on Amazon, but this one appears to be the same product (but a slightly different color).

If at some point that listing is also removed or if you would like to look for other color options, you can try this link.

The adhesive panels are made of soft PE foam about 1/4″ thick covered in plastic.  They come in several styles, including gray or brown faux wood planks (sometimes called “shiplap”) or white faux brick.

The foam creates a 3-D textured effect that looks very realistic, and in fact, I’ve seriously considered buying more to create an accent wall in my RV.  I think this stuff would look especially good on the headboard area of an RV, in a small bathroom, or lining the walls of a slide-out.

If you’re looking for way to create the look of a brick or shiplap wall in your RV but want something that looks a little more realistic than wallpaper, I definitely recommend this product.  However, I wouldn’t use it near a stove cooktop since it’s made of plastic and could melt (check out this post for kitchen backsplash ideas) I also wouldn’t count on being able to remove it later, as the adhesive is very strong.

Because the panels have a plastic coating, they would be easy to wipe clean, and according to the product listing, they are resistant to moisture.  Because the adhesive is so strong, I’m not worried about condensation getting underneath.

Here is what the product looked like out of the package:

In this close-up photo you can get a better idea of the thickness and the type of material:

The panels have a paper backing you peel off to expose the adhesive.

The first step was to measure and cut the panels to the correct size.  “Measure twice and cut once,” as they say!

I started out using an X-acto knife over a cutting board to cut the material, but later I started using a pair of sharp scissors and those worked well too.  I think I would recommend using a box cutter / utility knife for long, straight cuts, and scissors for trickier parts with angles and curves.

ALSO READ:
Is It Safe to Use a Space Heater in an RV?

Here is what the cut edge of the panels looks like, so you can see the type of squishy foam they’re made of:

Then I got started sticking it to the walls.  I decided to run the “planks” horizontally so that the foam would easily bend with the curve of the wall.  I like this look better anyway.  Even though the adhesive is very sticky, I was able to carefully pull the panels away and reposition them if needed.  However, I ended up wasting an entire panel when it accidentally became stuck to itself and trying to pull it apart caused it to tear, so be careful not to let that happen!

After I installed the first one, I learned with the second one that it was better to start at the top and leave the extra inch or so of space at the bottom next to the floor instead of starting at the bottom and working up to the top, so that way the narrow strip I cut to fit in the gap would be less noticeable.

I had to cut a narrow vertical strip for the 6 inches or so in the middle of the back of the closet that wouldn’t look so great on a large wall, but since literally no one will ever see it, I decided to do it the easy way rather than to try cutting the panels so that the lengths of the planks appeared to be staggered, which is what I would do for joining the panels some place more visible.

The hardest parts were the walls with a curved edge and going around the closet pole (which I was too lazy to remove and put back later).  But since the material bends, I was able to position it with the backing still on, squish it into place, and cut along the curve.  I probably would have been a little more careful to measure instead of it doing it this way had it been somewhere more visible than the back corner of my closet.

ALSO READ:
How We Prepare Our RV For Cold Weather Living

Because the foam is sort of squishy, it’s very forgiving of mistakes.  You can squish a small piece in to patch a gap and it expands to fill the space so that it hardly shows, which is what I did so that the panel could slide in over the closet pole.

Below is an up-close look at the 3-D wood grain texture of the product.  To me it looks very realistic and I love the color (SUCH a big improvement over the beige wallpaper, which I had always regretted not painting when we painted the walls in the rest of our RV.

And here it is finished!  The whole project only took me a few hours, even with stopping to take pictures.  And in case you’re wondering, I ended up using about 8 1/2 panels, which was two packs of 5 panels each.  I would’ve had a full panel leftover had I not accidentally ruined it, and I still had enough partial pieces left that I plan to use them to line the inside of my bathroom medicine cabinet. 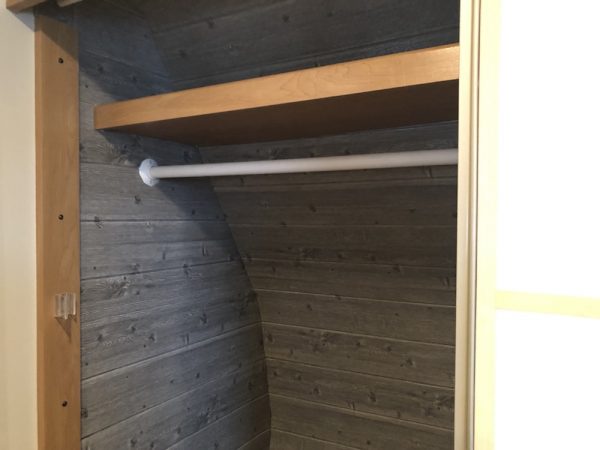 Here’s how it looks with my clothes put back in, which I took the opportunity to sort and organize. 🙂  (I talk more about RV closet organization ideas in this blog post.)

So do the foam panels actually keep my closet warmer?  I can’t really say definitively because I wasn’t able to measure before and after and I didn’t have any problems with condensation I was trying to solve, but it’s 33 degrees outside right now and the walls don’t feel cold to the touch, and maybe it’s my imagination but I think it feels less drafty as well.  But I am so happy with the way this DIY project turned out just based on looks alone that for me it was worth it regardless!