You are here: Home / RV Modifications / DIY: How to Add (Removable) Walls to Shower Shelves 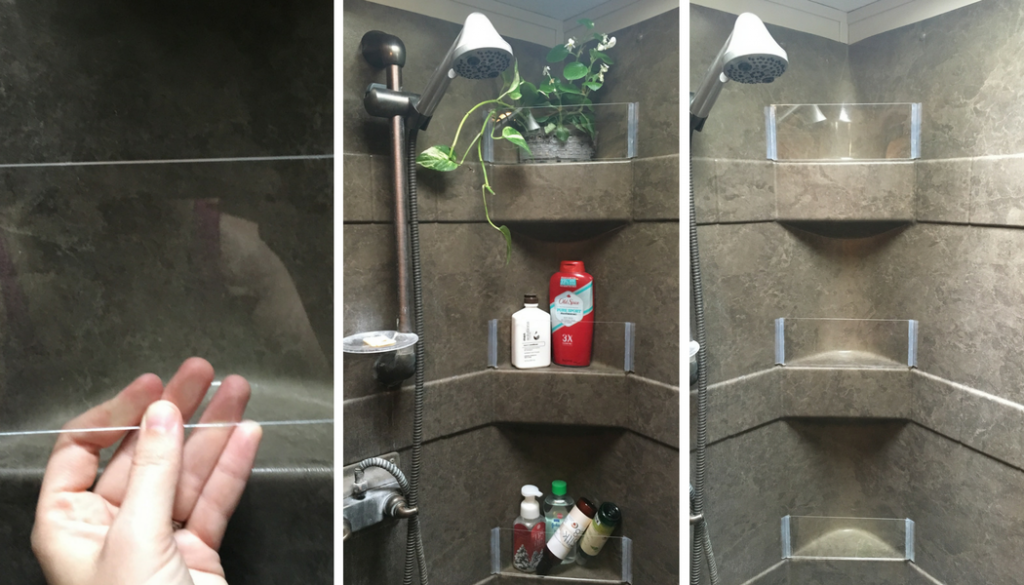 My RV came with shelves in the shower that, while they looked nice and are very handy when the RV is parked, I knew would be totally useless for storage when the RV was in motion.

Now I know that I could have easily solved this problem by purchasing an additional shower caddy or moving everything to the floor of the shower while the RV was moving, but I really like the idea of everything being in its proper place, and I was sure I could come up with some way to make the original shelves useful for travel.  So, I thought and thought and did a bit of research, and this is what I came up with.

The cool thing about this solution is that it is easily removable and leaves no trace.

Next, I purchased a strip of flexible silicone “h” type shower door seal, cut six 4″ pieces from it, and then cut the “leg” of the “h” off to make it a “y” shape instead.

Below you can see what it looked like before and after cutting:

The key to this project is clear acrylic double-sided mounting tape.

I just want to pause here and talk about this tape.  This stuff is amazingly strong, super stretchy and flexible, and yet easy to peel off and remove with zero damage to the surface it was stuck to.  In fact,  I wrote a separate blog post just about all the ways I use this stuff around my RV.

Here's a picture of the tape; the red part is a backing that peels off the tape.

So for this project, I attached 1″-wide mounting tape to the wide, flat side of the strips of shower seal and cut the tape to be the same length.

I then cut strips of the mounting tape in half lengthwise to make them 1/2″ wide and affixed them to the edges of the plexiglass.

Then I peeled the red backing off the tape on the plexiglass and attached a strip of seal to each edge, like this:

After that, I peeled the backing off of the wider strips of tape, and took it to my shower.

Attaching the Plexiglass to My Shower Walls

I stuck it to the walls of my shower, bowing the plexiglass just slightly as I pushed it into place so that the plexiglass would apply a slight pressure to the silicone seal.  I left about half an inch of space for water to drain out. Notice that my shower walls are textured – this works just as well for smooth or textured shower walls.

You may wish to try some other type of glue, perhaps a silicone adhesive, but to be honest it doesn't really matter that much because the shape of the seal and the pressure of the plexiglass bowing holds it in place well enough that the extra adhesion almost isn't needed.  I went ahead and used the tape to provide friction and help keep it from slipping.

The wider tape stays stuck just fine to the flat back of the silicone next to the shower wall, partially due to the pressure of the plexiglass, and that's what matters.

Here are all my plexiglass walls in place:

Here are my shelves filled with stuff.

I purposely left the bottles on the bottom shelf, which are both nearly full, upside down and leaning up against the plexiglass to see if it would hold, and it hasn't budged.  Water and humidity haven't affected the adhesion either.

I am able to keep plants in my shower because I have a skylight that provides light for them.  🙂 Begonia and pothos ivy, in case you were wondering.  😉  They are planted in a sponge caddy that I used to have hanging from Command strips on the shower walls, but I decided I liked it better sitting on the top shelf.

This project can be done for around $25-$30, or less if, like me, you already have the mounting tape. Here is a list of the materials I used for this project, as well as a step-by-step list of instructions:

If you do this project, please leave a comment to let me know how it goes, and if you come up with any improvements to my design!  🙂

In 2019, when we moved out of our fifth wheel after living in it for three years, I made this video to follow-up and talk about my experience with the project:

A Note, Six Years Later: I have been amazed to see photos all over the internet of other RV owners who used my idea! I'm so glad this solution has been useful to so many people! Over the years, I've heard from some people who said they pretty much followed my steps exactly as I wrote them, as well as from some people who said my process didn't work for them for whatever reason, but that they were able to adapt the idea to work for them. That's the beauty of RV life: if you are resourceful, you can figure out how to make just about anything work! If you give this idea a try, I'd love it if you would come back and leave a comment to let me know how it went for you!

For more ideas for organizing and storing things in a camper or motorhome, check out my RV organization resource page!