You are here: Home / RV Life / Why I Quit My Job and Moved Into an RV 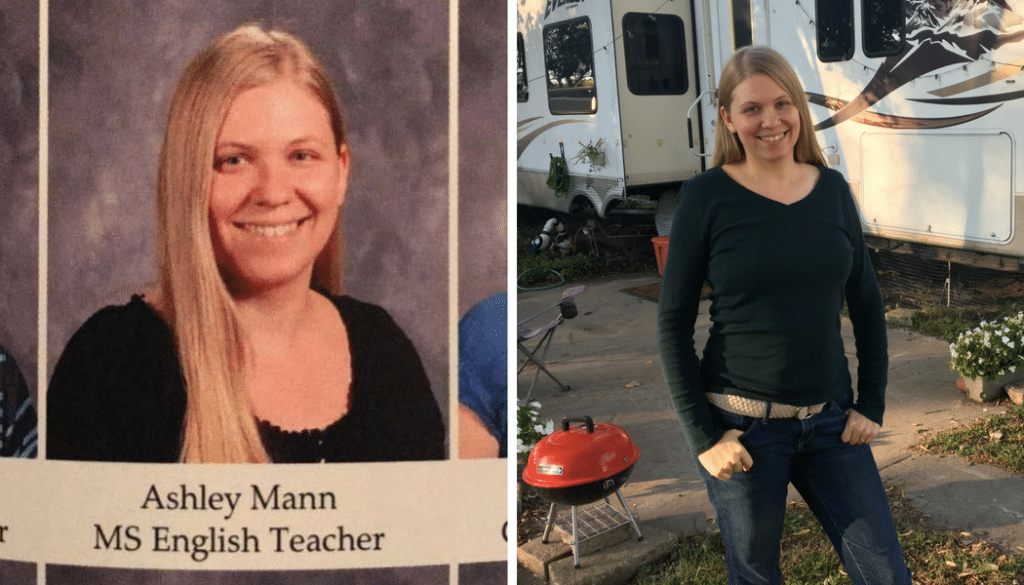 Part One of a Two-Part Series.  Read Part Two here.

Everyone who lives in an RV has a story.  Here's ours.

In 2015, I was a middle school English teacher.  I had been teaching for five years, and even though the job had been a huge personal challenge for me (especially in the first few years), I had wonderful students and co-workers, felt proud of my accomplishments, and had developed my classroom systems to the point where the job wasn't as overwhelming as when I first started out.

But while I was passionate about education (and still am), teaching in a traditional classroom setting was never what I wanted to do long term, and at that point I felt ready to move on.  I wished for a job that wasn't so demanding of my time and energy.  I wanted to be able to earn a living doing something I loved and could do well at, yet still have time in my day for other things that were important to me: exercising, cooking healthy meals, playing music, doing projects around the house….eventually maybe raising kids.  I have many fond memories of and deep appreciation for my time as a teacher, and I have a lot of respect for teachers, but I didn't want to be one forever.

I have a lot of respect for teachers, but I didn't want to be one forever.

The problem was, I felt stuck.  At that time, my husband Josiah's income from freelance web design was sporadic, and we depended on my paycheck to pay our bills.  At times I considered looking for a different job, but I knew from my experience job hunting after college that in the city where we lived, the only jobs my degree in English qualified me for were entry level office jobs–receptionist, administrative assistant, etc.–and those kinds of jobs weren't going to pay enough for us to live on, nor were they necessarily going to help me reach my goals any better than teaching would have.

Then one day, I was scrolling through Facebook when I saw an advertisement for a workshop that was coming to our town where people could learn about fixing and flipping houses.  We were watching a lot of Fixer Upper and Flip or Flop on HGTV at that time, and when I saw that ad, the thought struck me: I could learn a different career!  Josiah and I had remodeled our own house after we bought it as a foreclosure; maybe we could do that as a business, just like the people on HGTV!  And in the meantime, maybe I could get a real estate license and work as a realtor!

My career options didn't have to be limited to jobs I was already qualified for; if I wanted to get a job doing something else, I could become qualified!

Oh yeah – and we decided to buy an RV to live in.

Oh yeah – and we decided to buy an RV to live in. (Ha–I almost forgot that's what this whole article is supposed to be about!)  Before I can explain about the RV though, I have to back up and tell a little more about Josiah's career path.

When we got married in 2011, Josiah was working in the billing department of a hospital–a job that was about as exciting to him as being a paper salesman was to Jim Halpert in the TV show The Office.  Which was why he wasn't too heartbroken when, in 2013, he was laid off and given a nice severance package.

Around that same time, Josiah's uncle was trying to start a kitchen and bath resurfacing business, and was about ready to throw in the towel because he was having trouble getting customers. Josiah decided to help his uncle out by building him a website.  Josiah had taken a few very basic coding classes in the past and had also put up a blog type website for himself at one point, so he figured he could get something decent built for his uncle.  He did just that, and with a business website and little bit of SEO, Josiah's uncle started getting phone calls from potential customers.

After seeing the difference a simple website could make for a small business owner, Josiah started thinking maybe he could go into business building websites for people, and that led him to a career in freelance web design and development.  He started improving his coding skills with help from TeamTreehouse.com and CodeAcademy.com, and pretty soon he was starting to get jobs through Upwork.com.

With each job, Josiah's skills and experience increased, as did his pay, and at the point we decided to pursue a career in real estate, he was working in a long-term freelance contract for a financial tech company based in Philadelphia, so we knew we'd be able to pay our bills at least until that project ended.

I still haven't explained how the RV fit into all this.

Our dream of living in an RV started one night when we both woke up in the middle of the night, and out of the blue, Josiah said to me, “I think at some point we'll be living and traveling around in an RV.”

One night we both woke up in the middle of the night, and out of the blue, Josiah said to me, “I think at some point we'll be living and traveling around in an RV.”

This wasn't something we'd ever discussed before, but when I was younger I used to think it might be fun to live in RV someday, so I was excited when he suggested it.  It sounded thrilling and adventurous, and additionally, we had become aware of the Tiny House and Minimalism movements and found both of these lifestyles appealing.

After that conversation (which happened sometime in 2015), we started spending a lot of time looking at RVs online and even touring them at local dealerships.  I also started saving RV decor and organization ideas on Pinterest. (I had a much harder time finding those kinds of ideas then compared to now, which is a big part of why I ended up starting this blog…but I'll tell more about that in Part 2!)  We weren't sure how soon we'd actually get to live in an RV, or really even why we would be living in one, but we had caught RV fever!

We had caught RV fever!

Along with starting a new career in real estate, we decided to move three and a half hours away to Kansas City after my final school year ended, because it supposedly had an up-and-coming real estate market.  Since I was quitting my job and Josiah's income was sporadic, we knew we probably wouldn't qualify for another home loan, and we really didn't want to buy a house in Kansas City anyway because we weren't sure how long we'd stay there; if Kansas City turned out to not be a good place to invest in real estate after all, we wanted to be able to easily go someplace else.

It seemed to us like the perfect opportunity to make our dream of living in an RV come true.  We found a fifth wheel we liked and decided to finance it (we applied for the loan before I quit my job and we sold our house!).  We didn't have enough money to buy a truck yet, but we figured we could just live stationary in the RV until after we syndicated our first apartment purchase, and then we could buy a truck and move wherever we wanted to invest next.

So in July of 2016, we signed the papers on our Keystone Everest and had it delivered to a mobile home park in Kansas City, Kansas…which is exactly where it stayed for the next two years!

So that's how we ended up living in an RV, ha!

But there's obviously more to our story.  We no longer live in Kansas City, and our careers took a different path than we had planned (which I'm grateful for!).

You can read the rest of our story in Part Two of this series: How We Changed Careers & Found Jobs We Love as RV Nomads.

And if you're interested in full time RVing and/or finding remote work yourself, be sure to visit my RV Resource Library, which is full of helpful information for those in all stages of RV life.