You are here: Home / Cold Weather RVing / How to Make Camper Skirting Out of Foam Board Insulation 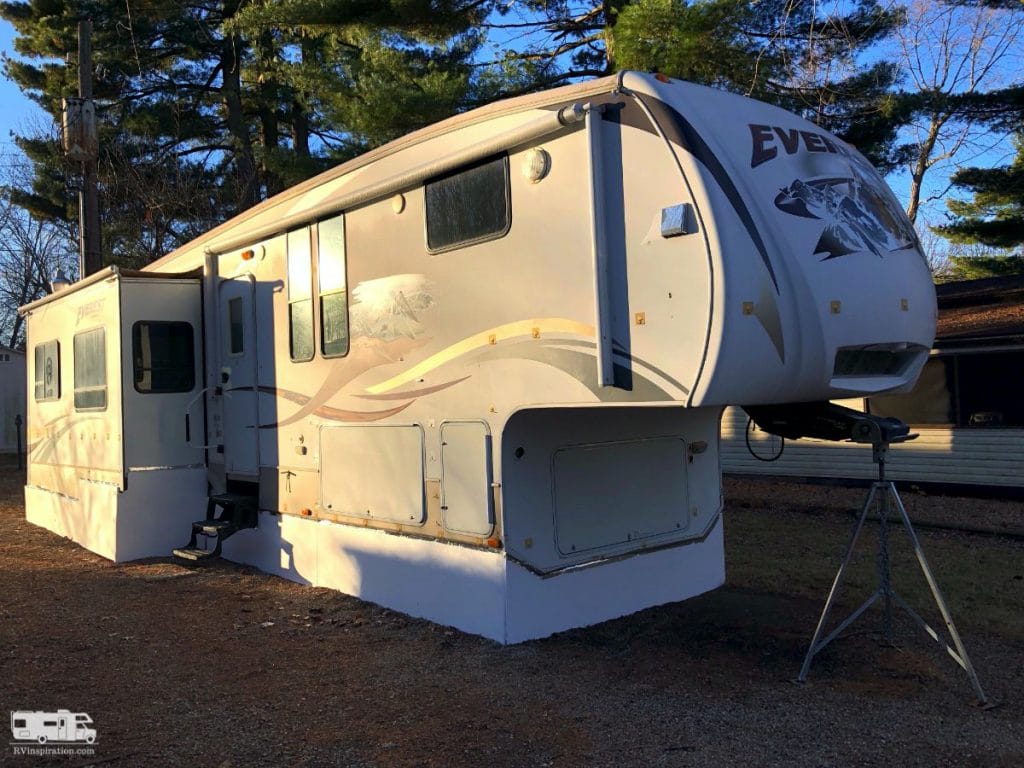 One of the winters we spent living in our fifth wheel (a four-season, 38-foot 2009 Keystone Everest) we stayed in a mobile home park that did not allow us to use the vinyl skirting we had previously made from billboard tarp material, so we made foam insulation board RV skirting instead.

The project was actually easier and cheaper than our DIY vinyl skirting, and we really liked how it ended up looking.

If you're looking for the cheapest and easiest way to skirt your trailer or motorhome yourself, foam board insulation is the way to go.

Materials We Used for Skirting Our Fifth Wheel with Foam Board

Video of the Installation Process

We recorded a video demonstrating the process as we made the skirting. Watch below or keep reading for a step-by-step tutorial.

The first step is to measure your camper and determine how much foam insulation you'll need.

I can't remember exactly how many pieces of foam board we bought, but it was around 6 or 7. A smaller camper would require a lot less.

Our camper required 2′ of skirting height. Since the sheets of foam insulation were 4'x8′, we cut them in half lengthwise and covered 16 feet of our camper with a single piece. There were a few spots where the height was greater than 2′, like the gooseneck of our 5th wheel. We left our gooseneck exposed, but you could patch foam board together or buy a fifth wheel skirt.

Measuring and calculating how to cut the foam board is the hardest part of this whole project. I recommend drawing it out on a sheet of paper first to help you keep your dimensions straight.

Step 2. Arranging the Pieces As You Cut

After we had cut several pieces, we put them where they were going to be used so we could see what we still needed to cut.

Optional: Put foam board on the bottom of your slides.

General, you only skirt the open areas beneath your RV. However, I have found that attaching foam board to the bottom of each slide really helps to reduce heat loss through the floors of my slide-outs and makes the camper feel a lot less drafty.

If nothing else, I would definitely do this to any slides that won't have skirting around them, like a bedroom slide that is so high up that the skirting won't reach it.

One note: Please learn from my mistakes and DON'T tape the foam board like I did in the above photo. That tape was very difficult to remove and left behind residue. I recommend using foil HVAC tape instead, which is what we used in subsequent years.

Step 3. Placing the Pieces of Foam Board

Once cut and arranged, it's time to place your foam.

If you're using a type of foam board that has a silver reflective material on one side, the silver side goes INSIDE, facing underneath your camper.  This is so that the heat will be reflected back under your camper. If you put the silver side facing outward, it will do nothing except reflect sunlight away from your camper, which is the opposite of what you want.

Step 4. Taping the Foam Board

After the skirting was placed where I wanted it, taped it to the camper using the foil HVAC tape.  I used only enough to hold the skirting in place because we planned to come back and seal it all later.

Note that this piece of skirting came up slightly higher than the bottom of our camper.  We felt that it was unnecessary to cut the foam board to the exact height. It was much easier to just cut each piece of foam board in half lengthwise since 2 feet of height was adequate for most of the camper.

In this spot, a 2-foot piece of foam board ended up being the perfect height, coming just under the edge of our camper.

Because measuring and cutting is the most involved part of this process, cutting all the pieces at the two-foot mark was an easy way for us to save on time and it didn't affect the efficacy of the skirting.

Step 5. Securing the Skirting Along the Bottom

This side of our camper was sitting in gravel, so following a tip from one of our neighbors, I dug out a trench (using the claw side of a hammer) for the skirting to sit in.

Then I packed the gravel up against the skirting on both sides (I packed it on the back first) to help hold it in place.

On one side of our camper, the ground was dirt instead of gravel, so to hold the foam board in place on this side we pounded tent stakes into the ground on each side of the foam.  This worked very well and also made it easy to remove a single panel if we needed to access the area underneath the RV for some reason.

Here's a photo of one of the tent stakes on the inside:

We chose white duct tape to match the white foam board so that it would look nicer.

Tip: How to Handle Tricky Spots

Here's how we handled a few of the trickier parts of our RV, where a straight-edged piece of foam board would not work.

For the front of our RV beneath the cargo access door, we had to cut the foam at a curve.  This wasn't really too difficult; we just used a marker to mark it first before cutting.

Making a Hole for the Sewage Hose

Here we had to cut out a hole for our sewage hose.

We used vinyl guttering to make a downhill track for our sewage hose so liquids drain quickly. This way we can leave our sewage hose exposed even in freezing weather. As long as outside temperatures aren't cold enough to freeze liquid while dumping, you don't need to cover the hose.

Going Around the Fenders

I cut the foam to fit around this fender and covered the gaps with HVAC tape to create a seal.

The height at the top of the wheel well was more than 2 feet, so I cut an additional piece of foam to fit. I attached it with duct tape on the backside of the foam.

My husband had a different approach to skirting the fender area on the other side of the RV.  He simply removed the fender to make it easier to cover.  If you do this, you might want to cover the holes with some HVAC tape to prevent them from rusting.

We just stashed the fender piece underneath the RV with the screws taped to it so they wouldn't get lost.

This part of the RV was kind of tricky because it involved different heights. Plus, we wanted to access our water connection (under the corner of the slide) if needed.

Here's what that area looked like after we got it done.

Skirting Around the Steps

The steps can also be challenging to figure out. After installing the foam, I covered the opening behind the steps with a shower curtain.

Step 7: Sealing the Skirting with Tape

After all of the skirting was in place, we taped along the top of all of it using HVAC tape. We did this to create a seal that would prevent heat from escaping and to create a neat, finished look.

We were happy with how our skirting looked finished, and even happier knowing that we would stay warm without having to worry about our pipes freezing.

That part of the RV is where our closet is located, and to help prevent heat loss there I lined our closet with faux wood planks made from foam that provided extra insulation.

In the past we tried making vinyl skirting to go around that part of the RV, but it was really difficult to get it to stay in place and the wind would frequently blow under it.  In the future, I would invest in a commercially made wind skirt like this one that was specifically designed for that purpose and also provided easy access to the storage underneath.

8 Ways to Secure Foam Board Skirting Along the Bottom

As promised, here are some suggestions for ways to secure your foam board skirting so that it stays in place even in high winds.

Pros and Cons of Using Foam Board to Skirt an RV

An alternative type of skirting for RVers who move often

If you will be moving a lot during the winter and need a type of skirting that you can quickly take down and put up, I recommend checking out AirSkirts.  This type of skirting didn't exist at the time we were living in our RV, but it's inflatable skirting made from heavy-duty, puncture-resistant vinyl that you inflate with an electric or battery-powered pump (kind of like inflating bounce house at a carnival).

The cool thing about AirSkirts compared to traditional vinyl skirting is that it doesn't actually attach to your RV, so you don't have to drill holes or put anything adhesive on your camper.  As it inflates, it takes shape around the various parts under your RV, and these hold it in place.

Do you have other ideas for securing foam board skirting, or any other tips for skirting an RV to share?  Leave a comment below!

Read Next: How to Prepare Your RV for Cold Weather