I talk about my favorite DIY helper, acrylic mounting tape, so often, that I thought I would do a whole blog post about all the different ways I've used it in my RV.

First, what it is: it's a clear, double-sided tape that is extremely sturdy yet can be removed easily and won't damage walls or whatever surface it was attached to or leave behind any residue.

You might be thinking some brand paid me to write this post, but nope–in fact, I've tried a few different brands of it, which I'll talk about at the end of the post. 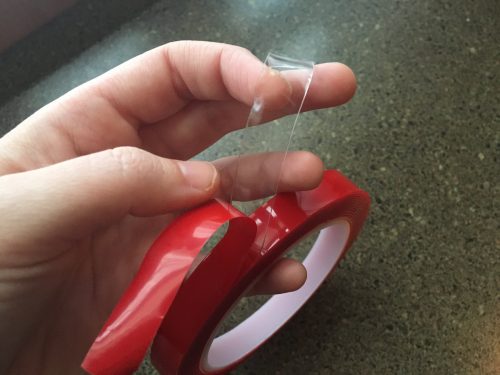 It's thicker than normal tape, and it's a stretchy/rubbery/gummy material, kind of like the stuff used to stick a new credit card to a piece of paper for mailing.  Its texture gives it some flexibility and helps it grab onto a surface.

And now for a few of the ways I've used it… 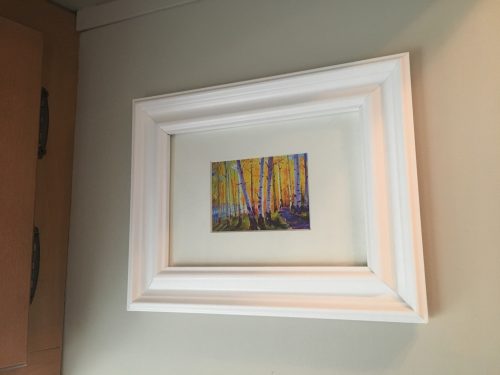 Here is a ceramic planter I hung on a curved wall (with a screw), and I used a tiny piece of the clear tape at the bottom and on the back of the planter to keep it from rattling on the wall every time my washing machine hit the spin cycle.  It hasn't budged since.  Let's all ignore the fact that this planter doesn't have any plants in it.  (Actually it does; you just can't see them because they are dead.) 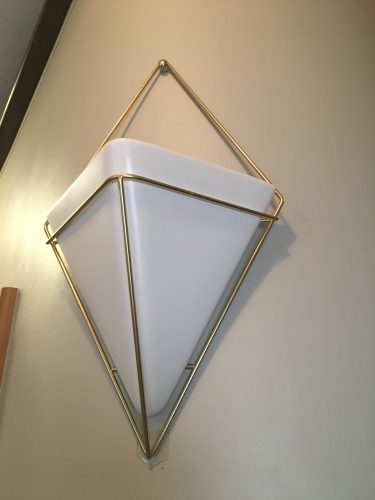 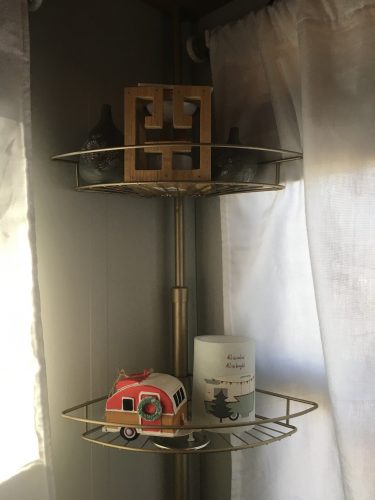 I used a tension pole shower caddy to add extra space to set stuff in the corner of one of my slides, but I had to remove a section in order to make it fit under the cabinet, and that meant I had to put one of the shelves on the top part that isn't supposed to have a shelf on it.

First of all, I used acrylic tape to wrap around the pole in order to make it wide enough to fit the hole in the shelf.  The problem was, as soon as I set a plant on the top shelf, the weight pulled down on the spring (duh, Ashley) and caused the caddy to fall over.  One of these days, I will find a way to cut the extra section of pole I removed so that it's short enough to fit the space, but until then, this was my solution (along with only setting lightweight things on the top shelf)–a piece of acrylic tape to hold the end of the pole in place.  So far it hasn't budged!

ALSO READ:
Everything That's Gone Wrong With Our RV 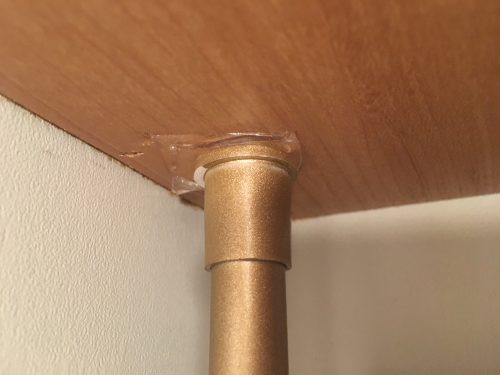 If you have an RV shower with built in corner shelves, you probably know that anything left on the shelves while the RV is moving will fall off.  I wanted to find a way to keep this from happening that would allow my shelves to be used and wouldn't require the shampoo to be used, so I made plexiglass “walls” for my shower shelves.  These plexiglass panels are stuck firmly to my shower walls (even when wet!) with acrylic mounting tape.

Another really successful project was making permanent plexiglass storm windows to cover the parts of my RV windows that don't open.  I used acrylic tape around the edges and stuck the plexiglass to that.  It's really hard (for me at least!) to take a picture of a clear glass window, but you can sort of see the plant's reflection on the plexiglass in this photo:

Here's another window project that's kind of silly but illustrates the ability of the tape to hold in any weather.  We let our cat go outside by climbing out this window and down this board, and I wanted to cover the window with plastic for winter, but needed to still be able to open it and have a hole for my cat to climb out, so I attached clear vinyl to the outside of the window using the tape.  I know the hole partly defeats the purpose, but at least it blocks some wind while the window is open and my cat is making up his mind about whether or not he wants to go out (after scratching at the window for the past five minutes). 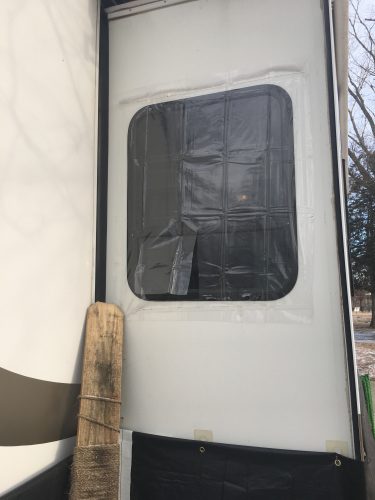 Here's a closer look.  I actually had my doubts about how well it would hold because it was below freezing the day I put it up and I had to warm the tape under my hands to get it to stick, but after it did stick, it stayed firmly stuck until spring when I removed it, even through sub-zero temperatures, rain, ice, and snow. 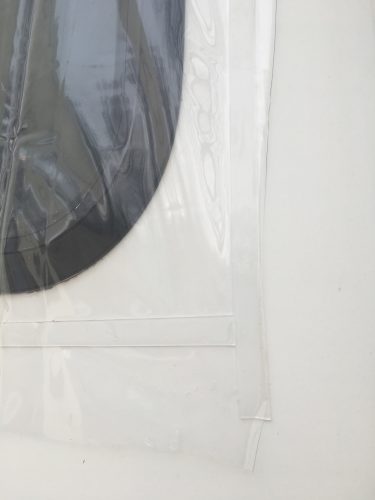 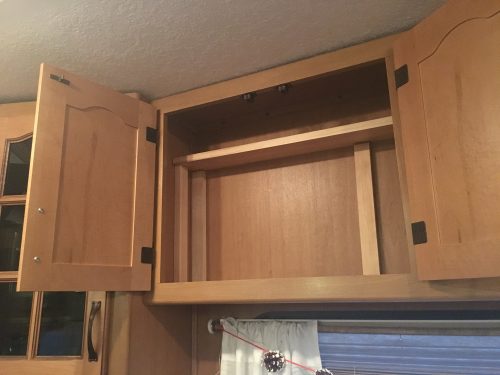 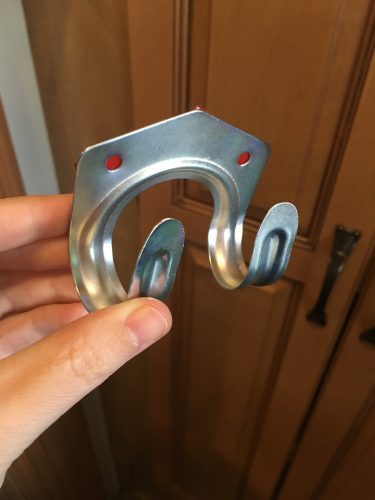 I wasn't sure it would hold, but it's been about a week now and they're still up there.  The temperature in that cabinet gets into the 50's, too.  [Edit 3/22/18: Well this idea DIDN'T work – the hooks fell down! 😀 I'm planning on trying foam mounting tape instead but haven't gotten around to it yet.  But, since doing the pot lid project, I've since used the tape SUCCESSFULLY for at least half a dozen other projects!] 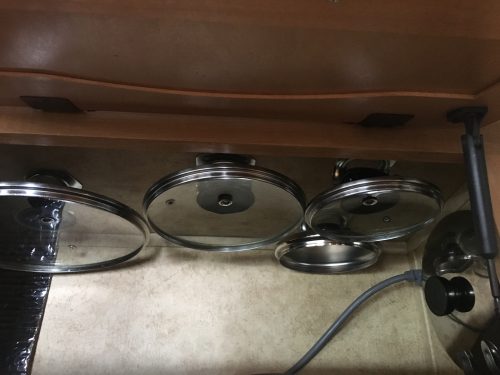 The first brand I ever tried was some no-name brand that is no longer available on Amazon, so too bad for them that I can't recommend them even though the product was good.

Next was Gorilla brand tape.  I bought this brand at Lowe's one day when I ran out of my first roll and needed some right away.  It worked just as well as the other brand, but costwise it isn't the best value compared to these next two brands. 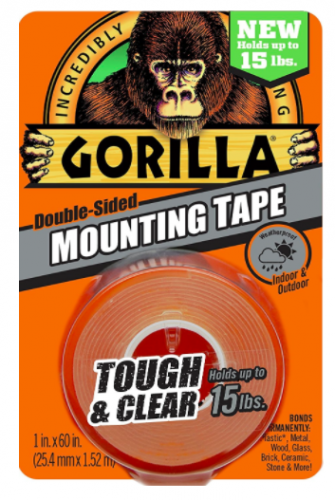 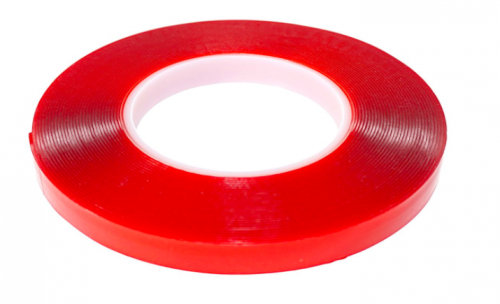 Finally is XFasten, which is the best deal for the money that I've found so far.  And if you look at the reviews for it on Amazon you can see photos where people tested it by using it to stick things like cast iron skillets and ceramic mugs and cans of stew to the wall. 😀 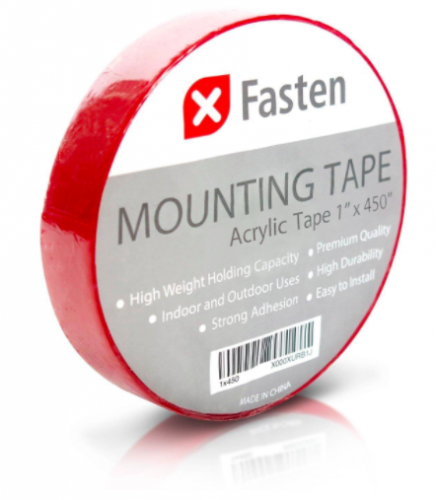 Almost done preaching!  The last thing I will say is that even though I can't promise this tape will work for every situation, I do believe that even if you buy it for some reason and it ends up not working in that particular case, you will still be able to find plenty of other practical uses for it–at least that's what happened to me! 🙂